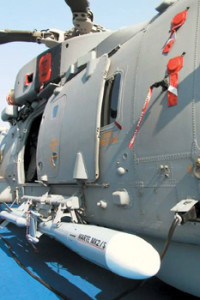 The MBDA development team tested the third Marte MK2/S pre-production missile at the Joint Services Test Range in Salto di Quirra. The missile, equipped with a telemetry pack in place of the warhead, was launched from an Italian Navy EH101 helicopter in optimal weather conditions with the target, a barge floating off the coast of Capo San Lorenzo, 30km from the launch point.

A typical operational sequence was used for the launch. Once the target had been located by the helicopter radar, target data was passed to the missile prior to launch. After release, Marte MK2/S completed its boost phase and then transitioned successfully into sustain at 10 meters above sea level. Once the missile seeker had achieved target lock, successful guidance to target impact was achieved with high precision. The sea-skimming missile hit the barge at the height above the water line designated under the trial programme, thus successfully completing the mission.

The following day another test launch was carried out to further verify the performance of Marte MK2/S, this time in especially difficult conditions. The missile was launched directly by the Italian Navy’s EH101 pilot without following any predetermined trial specifications or any direct support from the MBDA trials team. For this second test firing, with the target at a range of 27km, Marte MK2/S was launched with an off-bore sight for the seeker of 18°. The missile followed a set of way points during its cruise phase, locked onto the target and then destroyed it. These trials, together with others conducted in May 2006 by MBDA, mark the completion of the final contractual requirements and validate the operational requirement for Marte MK2/S to engage and destroy targets at the maximum possible range (over 30km).

Fabrizio Giulianini, Managing Director of MBDA Italia, said: “The qualification of the Marte MK2/S opens up new market opportunities for MBDA, in particular for MBDA Italy. Marte MK2/S is an advanced, reliable missile system that covers a wide operational spectrum and is unrivalled in this category of helicopter-launched anti-ship systems”. “Its current configuration with fully digital electronics offers flexibility in complex operational environments such as coastlines, fjords and/or inlets. The missile is particularly effective against rapidly manoeuvring targets and can be deployed without the need for intensive training due to its user-friendly mission programming. In addition, with the integration of Marte Mk2/S to the mission system of the NH90 and EH101 helicopters already completed, the weapon system has significant economic advantages for all customers of these aircraft”.

Marte MK/2S has significant installation advantages. The weapon does not require any specific sensors and its lightweight compact size, together with its flexible configuration, make it adaptable to a wide range of air platforms. In the near future it will be also be available for a range of warship platforms from 30 meters upwards. With a range of more than 30km and other operational characteristics, Marte MK2/S is optimised to operate in the Exclusive Economic Zone (EEZ) and to engage a wide range of targets from FIACs to frigates in low-intensity naval conflicts.

The helicopter-launched Marte Mk2/S will be delivered to the Italian Navy between 2007 and 2008 for installation onboard the EH101 and NH90 helicopters.