Home » ABOUT US » Governance » Éric Béranger 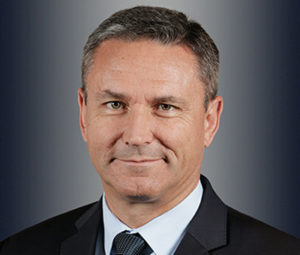 Since starting his career in 1988, he has held management positions in engineering, operations and finance at France Telecom, Société Générale, and Matra Marconi Space (now Airbus Defence and Space). At the inception of EADS in 2000, he was appointed Senior Vice President Marketing for all space activities and successfully led the negotiations of the Skynet 5-Paradigm secure satcoms PFI project with the UK Ministry of Defence.

He subsequently created Astrium Services in 2003. Under his leadership as the CEO, the company has grown its revenues and workforce more than 15 fold from 2003 to 2012 and achieved major successes with contracts including Skynet 5 (UK), Satcom BW (Germany), Yahsat (UAE), Passerel (France).

In 2012 he became CEO of Astrium Satellites, and major milestones for earth observation satellites contracts were achieved. In 2014, as the head of Programs in the new organization “Airbus Defence and Space”, his contribution led to the award of the first full electric propulsion commercial satellites contracts from SES and Eutelsat.

Born in 1963, Colonel in the citizen reserve of the French Air Force, he is a graduate engineer from the École Polytechnique and Telecom Paris.