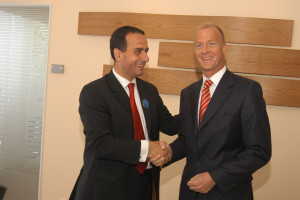 In 2010, the new SysFla air defence system is entering a decisive phase. The contractual negotiations with the German Federal Office of Defence Technology and Procurement (BWB) have been concluded. This coming autumn, the Budget and Defence Committee of the German Bundestag will decide on the project planning of the base configuration (STATIONARY BLOCK I). At the ILA 2010, the participating companies will present the new LFK NG launcher and missile for the first time in their original size as well as models of all SysFla system components.

SysFla, the future air defence system of the German Army, is being developed on behalf of BWB by MBDA Deutschland and Rheinmetall Defence under the umbrella of SysFla GmbH. SysFla closes the capability gap of the Bundeswehr in the short range air defence sector which was opened up by the retirement of the air defence systems ROLAND (2005) and GEPARD (2010), and which continues to grow on account of the limited in-service life of STINGER (through approx. 2018). SysFla offers comprehensive protection against all very short and short range airborne threats. Its spectrum ranges from small targets to high-calibre rockets as well as agile missiles and conventional threats such as combat aircraft and helicopters within an altitude of up to 5 km and an interception range of up to 10 km.

SysFla has been designed on the basis of complementary active components: the NBS C-RAM / MANTIS® gun from Rheinmetall and the New Generation Guided Missile LFK NG from MBDA Deutschland and Diehl BGT Defence. The gun covers the very short range (up to 3 km), while the LFK NG guided missile ensures short range protection (up to 10 km). The LFK NG missile plays a special role here. It supplements the NBS C-RAM / MANTIS® cannon system through its greater range, ensuring a secure stand-off distance e.g. against high-calibre rockets. At very close range, the NBS CRAM / MANTIS® effectively intercepts even highly manoeuvrable targets such as weaving cruise missiles with AHEAD munitions. Thanks to its modularity and broad-spectrum capabilities, the LFK NG missile can also be used in urban terrain from cover as well as aboard mobile platforms such as helicopters, vehicles or ships.

SysFla is designed to protect both stationary and mobile units in all situations and for all mission options. SysFla can support long-term stabilisation operations just as effectively as phases of intensified operations. Thanks to its system architecture, SysFla is also capable of operating effectively in both national and multinational networks together with ground-based air defence forces. SysFla thus complements the new tactical Medium Extended Air Defence System (MEADS) – the two systems are designed for different target spectrums, mission scenarios and ranges.

With SysFla/LFK NG, the Bundeswehr will obtain a high-performance short range air defence system effective against all current and anticipated threats. Virtually the entire German defence industry is participating in SysFla. The project is thus important not only in terms of defence and security policy, but also from the industrial policy perspective.