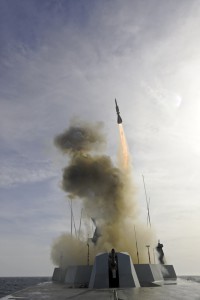 MBDA announces two successful launches made on May 18th and 19th to demonstrate the effectiveness of its Aster missiles. Both launches were from the Italian Navy’s Cavour carrier in the Poligono Interforze di Salto di Quirra (PISQ) and were made with the assistance of MBDA.

The launches to test the effectiveness of the SAAM/IT system were carried out: one in “autonomous” (self-controlled) mode and the other in “integrated” mode, controlled by the combat system. The autonomous mode launch was intended to test the SAAM/IT system’s ability to search, identify and intercept an attacking sea-skimmer missile as a direct threat to the ship herself.

The purpose of the integrated trial was to demonstrate the combat management system’s ability to target threats and to designate the SAAM/IT system to neutralise a threat similar to a sea-skimmer missile. In both trials, the threat was simulated using a MIRACH aerial target, configured as a missile. Both launches were entirely successful and the Aster missiles completed their tasks as required.

Antoine Bouvier, CEO of MBDA, announced: “These successful launches are further proof of MBDA’s technical capacities”. Antonio Perfetti, Managing Director and CEO of MBDA Italia and Executive Group Director Sales & Business Development MBDA Group, pointed out: “The success of these launches demonstrates to all our domestic and export clients that the SAAM/IT system is now fully operational“.