On 2nd February 2017, Polska Grupa Zbrojeniowa (PGZ) and MBDA, the European guided missiles group, signed a strategic partnership agreement. This agreement opens the way for future cooperation between PGZ and MBDA in the area of missiles and missile systems. In addition, the agreement also envisages the transfer of modern missile  technologies to companies within PGZ and integrating these companies into MBDA’s global supply chain. 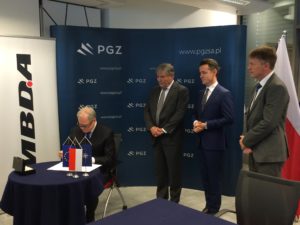 The aim of the signed agreement is to enhance the mutual cooperation between PGZ and MBDA as well as the development of the PGZ Group’s industrial skills regarding missiles and missile systems. This applies to air defence as well as naval and air-launched missile systems.

The agreement provides a framework for the future cooperation between PGZ and MBDA regarding the missile programmes included in the Polish Armed Forces’ Technical Modernization Plan, especially the programmes related to a short range air defence system, codenamed “Narew”.

If the  Polish Ministry of National Defence decides to select any of the missile or missile system solutions offered by MBDA, the agreement stipulates that MBDA will carry out a significant and mutually agreed transfer of technology to companies  within the PGZ Group. In this event, MBDA has also declared its  intention to transfer  know-how to Poland and to look at the possibility of including Polish defence industry companies within MBDA’s global supply chain.

“This is a step in the direction of building PGZ’s competence in the area of missile technologies, understood broadly. Following a months-long negotiations process we have reached an agreement on deep co-operation and exchange of technologies between the companies composing PGZ, and the facilities of MBDA. Thanks to this we are now confident that we can obtain the competences and deliver a number of military programmes, especially the ‘Narew’ short range air defence system, among others. This is a very important day for us, as it opens the perspective of co-operation between defence industries in European countries which are NATO members”, said Arkadiusz Siwko, the President of the Managing Board of PGZ S.A. 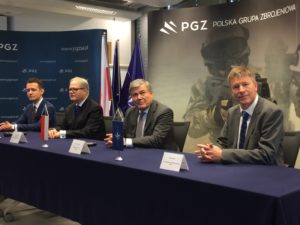 “The strategic agreement signed today formalises MBDA’s longstanding strategy in Poland and allows us, together with PGZ, to take a major step forward in supporting Poland to acquire the very latest missile and missile systems technology. MBDA’s core strategy, since its early foundation in 2001, has been to promote effective and enduring  cooperation across Europe. This is the best way to develop defence industrial capabilities within the partner nation which  then guarantees them  free access to  capability   and so meets their requirements forsovereignty and freedom of use. The signing of this agreement is a major step forward in achieving this goal for sovereignty and is something that MBDA sincerely want for Poland.”, said Paul Stanley, MBDA VP for Northern Europe.

Under the agreement, PGZ Group companies will have the opportunity of cooperating with MBDA on missiles and missile system elements such as launchers, command and control systems, data transmission systems, support vehicles, system integration, programme management, servicing and training.

Polska Grupa Zbrojeniowa (PGZ) is a leader of the Polish industry and one of the largest armaments holdings in Europe. It unites over 60 companies (from the following industries: defence, shipbuilding, new technologies) and generates an annual revenue of PLN 5bn. Thanks to the utilisation of the potential for nationalising technology, close cooperation with Polish scientific circles, and pressure on the research and development process, PGZ is offering innovative and security-improving products. PGZ’s offer comprises, among other things, a very short range air defence system with the POPRAD system and the SOŁA radar; a portable anti-air GROM system; the E-310 unmanned air vehicle system; the ROSOMAK armoured personnel carrier; an artillery system with  the KRAB self-tracked howitzer; and individual personnel equipment with BERYL assault rifles. Additionally, PGZ possesses competence in the field of designing, constructing, and equipping military ships. Moreover, PGZ has been modernising and maintaining vehicles, airplanes, helicopters, and military ships (including but not limited to the equipment produced in former USSR). In the nearest future, PGZ will be developing space and satellite technologies as well as cybertechnologies.