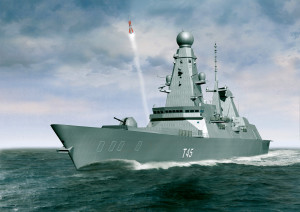 PAAMS (Principal Anti Air Missile System), developed by world-leading guided weapons group MBDA, will enable HMS Daring and the Type 45 fleet to defend the Royal Navy’s expeditionary fleet including aircraft carriers, groups of ships and amphibious landing forces against all current and future airborne threats.The combination of PAAMS with the new Type 45 A destroyer will make HMS Daring and the follow-on class of ships the most powerful of any destroyer in the world.

As such, PAAMS is the first 360° omni-directional weapon system ever developed, providing multi-layer air defence to armed fleets or groups of unarmed support and merchant ships. Comprising a Multi Function Radar (MFR), a sophisticated Command and Control sub-system (C2), and a dual missile Vertical Launch Sub-system (VLS) containing a combination of forty-eight, ready-to-fire Aster 15 and Aster 30 missiles, PAAMS can protect against both omni-directional and co-ordinated attacks from sub- or supersonic missiles, aircraft and high value UAVs. The system is supported by a Long Range Radar (LRR) for long-range surveillance.Two PAAMS system variants are being developed.

The Royal Navy will use a PAAMS system fitted with the SAMPSON radar – PAAMS (S). The French and Italian navies also plan to deploy PAAMS, equipped with a different radar, the EMPAR radar/fire control unit known as PAAMS (E), from their new air defence frigates.Depending on the threat, the combination of the MBDA-designed Aster 15 and Aster 30 missiles enables the PAAMS system to fire in any configuration from the PAAMS Sylver A50 launcher providing an impenetrable defence envelope, day or night, and even in cases of extreme electronic countermeasures or bad weather.Programme StatusThe PAAMS programme was launched on 11 August 1999 with the award of a contract by the DGA in France on behalf of France, Italy and the UK.

At this time three PAAMS systems were ordered along with the required Aster 15 and Aster 30 missiles to equip the first-of-class ships for each of the three countries. The UK Royal Navy will deploy its first PAAMS system on HMS Daring, the first of the Type 45 destroyers, while the French and Italian navies will use PAAMS to equip their Horizon class frigates. In 2003, contracts were placed for an additional five PAAMS systems for the follow-on Type 45 destroyers for the Royal Navy, one system each for a further French Horizon and further Italian Orizzonte frigate and the supply of more Aster 15 and 30 missiles.

For PAAMS(E), the system is currently being integrated on the Franco-Italian trials ship Carabinieri, with the first system firing scheduled to take place in the next few months.In addition, the production programme is well advanced with initial delivery and installation of key PAAMS sub systems now in progress for the FOC ships.