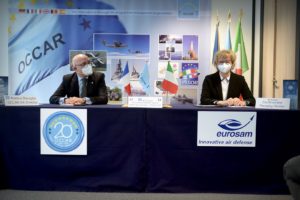 The contract for the development of the SAMP/T NG (New Generation) for France and Italy has been signed today at OCCAR premises in France (Paris area) in the presence of the French Air and Space Force staff, the Italian Army staff, the OCCAR Director and National representatives of the French Armament General Directorate (DGA) and of the Italian Armament Directorate (SGD). OCCAR has awarded the contract, by delegation of DGA and SGD, to the Franco-Italian consortium eurosam; backed by its three shareholders MBDA France, MBDA Italy and Thales.

This contract complements the first contract signed in 2016 with the objective to enhance the SAMP/T systems operational in the French Air and Space Force and the Italian Army.

With this contract, eurosam is able to deliver an important enhancement of the SAMP/T system based on:
– An enhanced missile to enlarge the ASTER family: the ASTER Block 1 NT (new technology) with a new seeker and a new computer able to face the new emerging threats.
– An upgraded launcher featuring new electronic equipment.
– A new multifunction rotating Active Electronically Scanned Array radar.
– A command and control module based on upgraded open command and control software architecture and enhanced connectivity.

The SAMP/T NG is designed to achieve all Ground-Based Air Defense missions with enhanced key capabilities. It is a long-range surface-to-air missile defense system able to:
– Operate in a dense civilian air environment, in cooperation with friendly military aircraft and fully integrated into air defense networks.
– Provide a 360-degree protection to armed forces and sensitive civil or military sites.
– Offer a dual capability to defeat simultaneously all types of targets, in any combination of types.
– Counter emerging and future threats as diverse as manoeuvring ballistic missiles, re-entry vehicle ballistic missiles, high-speed tactical missiles, UAVs and highly manoeuvring aircraft, in a saturation attack scenario and a challenging cyber environment.
– Deploy quickly with a limited number of personnel and integrate easily in an air-defense network.
With these enhanced features, SAMP/T NG will provide to France, Italy and any other customer, the capability to guarantee their airspace sovereignty, to protect their territory and population and to protect their troops in operations.