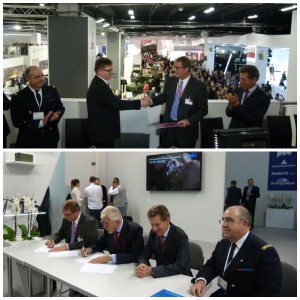 The two LoIs signed today between MBDA and MESKO and PIT-RADWAR S.A respectively are concrete examples of how Polish industry and its MoD will gain access to breakthrough technology.

In the LoI with MESKO, MBDA is proposing to its Polish partner to expand cooperation on Aster 30 B1 missile equipment, but also to be involved in the development of the new Aster B1NT missile. The scope of cooperation starts from the production of main equipment for the missiles and continues through to the final assembly line. Key advanced technologies such as warhead, booster and servo actuators will be transferred to our Polish partners, as well as missile maintenance and training.

Antoine Bouvier declared: “I am very pleased to attend MSPO in Kielce to confirm MBDA’s commitment to enhance our strong cooperation with our Polish industrial partners, in line with customer expectations.”

MBDA’s Aster 30 missile is highly representative of MBDA’s leading global position in the area of naval as well as land-based air defence. Aster 30 is used by the SAMP/T ground based air defence system, in service in the Italian Army and the French Air Force (where it is known as MAMBA). The SAMP/T land-based medium range air defence system comprises a fire control system based on a multi-function electronic scanning radar and a Vertical Ground Launcher mounted on trucks and capable of firing eight missiles in rapid sequence.

The Aster 30 missile system offers high-level tactical and strategic mobility and due to its high rate of fire is capable of countering saturating threats. Moreover, it features outstanding manoeuvrability and agility in order to achieve a direct hit on the target (“hit-to-kill”). In addition to all aerodynamic targets, including cruise missiles, SAMP/T with Aster 30 Block 1 and Block 1 NT versions can intercept short-range or ballistic missiles having a range of up to 1500 km. The French Air Force has carried out several test firings to intercept simulated ballistic missile attacks in front of the Polish authorities. Such successes have confirmed Aster 30’s status as the only European-developed missile having such a capability.