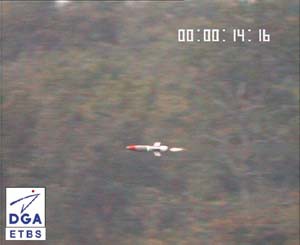 The wire-guided missile struck the centre of the target at a distance of 3,000 meters, MILAN ER’s maximum range. Following on from a number of preparatory test firings performed over the last six months for both the firing post and the missile, this full system firing marks a tremendous success in the initial validation of the combined firing post and missile unit.

The test performance schedule notified to the government agencies concerned, has as a result been fully met by MBDA’s Franco-German team.

The next few months will be dedicated to carrying out any necessary fine tuning and to the validation of the system. This will allow MBDA to submit the MILAN ER system as early as 2007 for evaluation by the relevant authorities in France and Germany and by any other countries that express interest.

Following on from the success of the MILAN anti-tank missile in operational service worldwide, MILAN ER is MBDA’s next-generation response to the need for an extended operational envelope adapted to today’s changing threats.

With an annual turnover of over €3.5 billion, an order book of over €13 billion and over 70 customers around the world, MBDA is the world’s leading missiles and missile systems company.  Currently, MBDA has 45 operational missile and countermeasure systems programs and has proven its leadership in the management of large multinational projects.