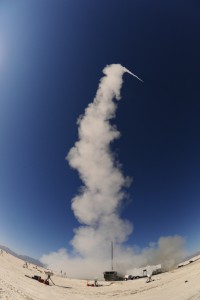 The test exploited the MEADS capability for full-perimeter, 360-degree defense with the PAC-3 MSE Missile performing a unique over-the-shoulder maneuver to defeat the target attacking from behind the MEADS emplacement.

MEADS successfully completed its first flight test on November 17, 2011, against a simulated target attacking from behind. A PAC-3 MSE Certified Missile Round was employed during the test along with the MEADS lightweight launcher and battle manager.

MEADS International, a multinational joint venture headquartered in Orlando, Fla., is the prime contractor for the MEADS system. Major subcontractors and joint venture partners are MBDA in Italy and Germany, and Lockheed Martin in the United States.

The MEADS program management agency NAMEADSMA is located in Huntsville, Ala.