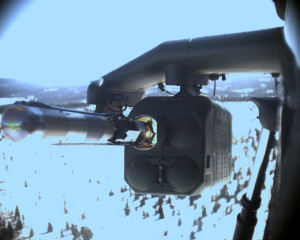 Three firings, three hits! This is the impressive score of the test firing exercise conducted with the PARS 3 LR guided antitank missile system. For the first time, the test firings with warheads were carried out using a Tiger support helicopter of the German Army. All guided missiles hit their targets at the optimum point of impact.

The first two test firings from the Tiger were carried out within one minute of each other. Flying just 10 m above the treetops, the helicopter first fired at a stationary target around 7,000 m away. The second missile was fired just a few moments later at a target travelling at approximately 40 km/h. To make this shot, the Tiger turned 180° and assumed a firing position at an altitude of approx. 100 m. The moving target was approx 700 m distant. Both PARS 3 LR missiles hit the targets precisely at their centres.

The third missile was fired the next day while the Tiger was flying forward at high speed. The Tiger fired on a stationary target around 7,000 m away while travelling at a speed of 180 km/. This guided missile also hit its target at the optimum point of impact. “With this successful firing campaign, we have impressively demonstrated the exceptional capabilities and high accuracy of the PARS 3 LR,” declared Werner Kaltenegger, Managing Director of MBDA Deutschland. “We also demonstrated our dependable performance. In times of tight budgets, this is a particularly important signal to our customers.”