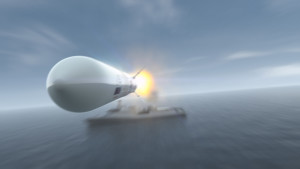 MBDA’s Future Local Area Air Defence System (FLAADS-Maritime) programme is achieving key development milestones that exemplify the high maturity and global market potential of the system. The FLAADS-M system will equip the Royal Navy’s Type 23 frigates and future Global Combat Ship and can easily be integrated onto a range of alternative naval platforms.  The heart of FLAADS-M is the Common Anti-Air Modular Missile (CAMM), a high performance missile intended to deal with all current and future threats.  CAMM will also be the centrepiece of the related FLAADS-Land system intended to replace the British Army’s Rapier Air Defence System at the end of the decade.

MBDA is progressing rapidly with the FLAADS-M programme, fully exploiting its experience of developing the world leading Sea Viper system now in service on the Royal Navy’s T45 Destroyers.  Significant achievements are being made in all areas, notably with the development of the FLAADS Command and Control system (featuring greater than 75% re-use of Sea Viper C2 software) and the development of the FLAADS Platform Data Link, both of which are already undergoing trials in MBDA development facilities.  Moreover there has been a seamless progression of experienced staff and facilities from the Sea Viper programme onto the FLAADS-M programme, all to ensure that the lessons learned during the successful Sea Viper development are fully brought to bear.

The maturity of the CAMM missile design has been shown in a number of important trials in recent months.  The novel Soft Vertical Launch concept has been conclusively proven in a number of trials, culminating in a successful ejection and turnover trial that took place on 20th May at MBDA’s Bedfordshire facility.  This trial took place from a truck platform, providing direct read-across to the FLAADS-L programme.  Significant progress has also been made with the CAMM RF seeker development, with a series of successful air carry trials having taken place earlier this year.  CAMM benefits from significant re-use of technology from other MBDA products, providing a missile with high maturity for this stage of development. Ease and versatility of platform integration, coupled with low cost of ownership, are intrinsic to the FLAADS-M system design.  Most notably, there is no need for complex – and expensive to maintain – platform mounted trackers.  As such the system is an excellent proposition for a variety of naval platforms and a high degree of interest is already being shown.

Commenting on the significant progress made by FLAADS programme, Executive Group Director Technical and MBDA UK Managing Director Steve Wadey said: “MBDA can rightly claim to have developed some of the most advanced weapon systems in-service today and that experience, combined with the next generation of technology, ensures that FLAADS will offer a key air defence system for the UK Armed Forces over the coming decades. It will offer the Royal Navy and British Army a multitude of benefits in terms of operational performance, platform flexibility and lower cost of ownership, which is being designed into the system from the outset. These features also make the system highly suitable for the international market with the opportunity to take these advantages and tailor them to a host of platforms and applications.”