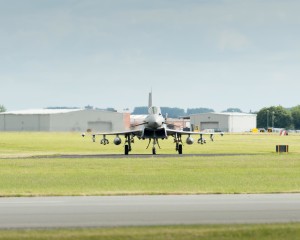 This upgrade is a significant step in the spiral development of the Brimstone weapon. It introduces an insensitive munition compliant rocket motor and warhead. Together with an enhanced version of MBDA’s unique Dual Mode Semi-Active Laser/ Millimetric Wave seeker and an enhanced autopilot this significantly increases the weapon’s envelope (off-axis and maximum range).

MBDA is furthermore supporting the integration of Brimstone onto Typhoon. Carriage of the Brimstone three missile launchers and missiles is also part of the flying display at Farnborough Air Show for the first time. Brimstone will enter service on Typhoon as part of the P3E programme and the Royal Air Force’s Project Centurion.

Brimstone is a unique air–to-surface precision attack weapon currently being used in operations over Syria and Iraq by the RAF. Already demonstrated from land, sea, fast jet and remotely piloted aircraft, Brimstone provides a true multi-role/multi-platform approach and very high single shot lethality to reduce whole life cost ownership of complex weapons. It is used for the engagement of fast moving and manoeuvring targets, as recently demonstrated from both Tornado GR4 and Reaper RPAS, achieving direct hits against targets operating at speeds up to 70 mph and proving ideal for operations in collaterally constrained environments. MBDA and Boeing have also successfully completed a series of physical trials and firings of Brimstone on the AH-64E attack helicopter to confirm the feasibility of integrating the missile with the United Kingdom’s future Apache AH-64E fleet.