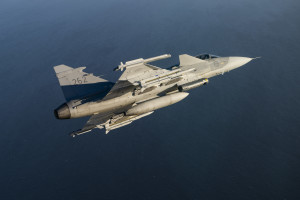 The announcement was made by Major General Mats Helgesson, Chief-of-Staff of the SwAF, in the presence of the CEO of Saab AB, Håkan Buskhe and the CEO of MBDA, Antoine Bouvier. Major General Helgesson, said, “After extensive testing by FMV and the Gripen Operational Test and Evaluation unit, all of the new MS20 functions including the Meteor missile are now fully integrated with Gripen. The Swedish Air Force is now in its Initial Operational Capability phase with the Meteor. The Meteor missile is currently the most lethal radar-guided missile in operational service, and the Swedish Air Force is the only operational user so far. I am very proud and satisfied to have the Meteor in the inventory of my air force.”

Antoine Bouvier, MBDA CEO in responding to the announcement said: “Today is a very special day for the Swedish Air Force, for Saab and Gripen, for Meteor, for MBDA and particularly for multi-national industrial cooperation in defence. Meteor is a missile that no nation could have developed or produced alone. Sweden and the five other Partner Nations in the programme – France, Germany, Italy, Spain and the UK – can be both proud and confident that they have a missile that ensures unquestionable air superiority for their pilots in the defence of their respective countries’ sovereign interests. Along with that, and thanks to their involvement in the programme, they also have the freedom and independence to deploy and develop this unique missile capability as they see fit and as their requirements evolve. MBDA looks forward to continuing its extremely close cooperation with Sweden and with Saab in developing world-class military capabilities in support of the sovereignty and freedom of action of both Sweden and other cooperating nations”.

At the end of April 2016, the FMV (Sweden’s Defence Materiel Administration) introduced the latest MS20 software load to the SwAF’s Gripen fleet thus enabling the JAS 39C/D to become the first aircraft capable of operating the ramjet-powered Meteor missile.