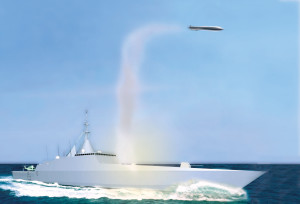 MBDA has received notification from  the DGA (Délégation Générale pour l’Armement), of the development and production contract for 250 SCALP Naval missiles, the naval cruise missiles destined to equip the French Navy’s FREMM multi-mission frigates and Barracuda submarines. 200 missiles will be for the FREMM and 50 for the Barracuda.

The contract, dated 29th December 2006, is made up of four tranches with the first tranche coming into force with this notification and covering the delivery of 50 missiles for the FREMM frigates in 2013.

The value of the contract is 910 million euros.

Production of the SCALP Naval missiles will be carried out in Selles Saint Denis, MBDA’s central region site in France.

Marwan Lahoud, MBDA’s Chief Executive Officer, said: “With this notification of the SCALP Naval contract, France will as of 2013 be equipped with an independent strategic capability that is both new and unique in Europe. SCALP Naval, Europe’s first naval cruise missile, comprises the most advanced of technologies. This contract therefore, also ensures that MBDA will be able to maintain a high level of technology and a strong industrial base in France”.

Didier Evrard, Managing Director of MBDA France and Group Director of Product Lines, stated: “This contract, bringing the innovative and highly effective SCALP Naval into being, is the result of years of preparation work carried out by MBDA personnel in close collaboration with the French DGA. Congratulations are due to all those who have contributed to this successful launch”.