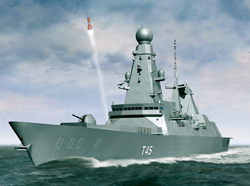 During the autumn, the PAAMS (S) Sea Trials Platform, Longbow, will be towed from its present berth in Portsmouth Naval Base (on the south coast of England) to the Mediterranean. Longbow will “sail” fitted with all the integrated system elements, except the missiles, of the Royal Navy’s new air defence system.

Once in the Mediterranean, final preparations will be made to the barge and PAAMS (S) system in readiness for the start of a comprehensive firing campaign that will start in 2008. The firings will take place at the CELM (Centre d’Essais de Lancement des Missiles ) test range near the Ile du Levant off the French Mediterranean coast.

PAAMS is the self, local and fleet area defence system that will equip the Royal Navy’s new Daring class of Type 45 destroyers as well as the Horizon and Orizzonte frigates of the French and Italian Navies respectively. The Royal Navy’s PAAMS (S) system differs from the PAAMS (E) selected by France and Italy with respect to the MultiFunction Radar (MFR). Whereas France and Italy opted for the EMPAR MFR, the very specific requirements of the Royal Navy have resulted in the development of the SAMPSON MFR by BAE Systems INSYTE.

MBDA UK’s Managing Director, Steve Wadey, said: “We are approaching the PAAMS (S) firing campaign with maximum confidence. A great deal of progress has already been made with all the system elements of PAAMS. Test firings have taken place with PAAMS using the EMPAR radar and these of course have provided invaluable information to support the PAAMS (S) integration. In addition, all the de-risking that has been taking place at the MBDA PAAMS Integration Facility in our Bristol site and other test facilities means we are now able to move rapidly forward and ever closer to the date when the Royal Navy will be equipped with what is undoubtedly the world’s best naval air defence system of its type”.

Further maturity of the PAAMS (S) system elements has been provided by the numerous successful firings of the Aster 15 and 30 missiles for the Franco-Italian SAAM naval air defence system, the SAMP/T ground-based air defence system and the PAAMS (E) system (for which the final qualification firing took place in May 2007).
All the PAAMS (S) system elements have been installed on the first of class Type 45, HMS Daring, with all but the MFR being fully set to work. Deliveries of PAAMS equipment to the second Type 45, HMS Dauntless, are now in progress.