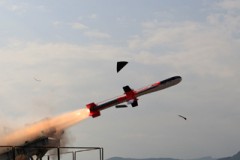 A naval configured Marte missile was launched at the Poligono Interforze di Salto di Quirra on 26 May. The purpose of the launch was to qualify the new munition by checking canister behaviour during missile launch and ensuring that the missile and canister separated correctly.

The firing exercise progressed as planned with the missile executing a trajectory which included a number of different way points to check its dynamic capabilities.
Analysis of the missile’s flight parameters, which were sent in real time to the ground station, are still ongoing and will provide an accurate final assessment of the launch.

The launch demonstrated that the Marte missile operates equally as effectively in its naval configuration as in its air-launched configuration.

Antonio Perfetti, Managing Director of MBDA Italia and Executive Group Director Sales & Business Development MBDA Group, stated: “With this launch, the Marte missile has now become a full MBDA legacy product in the maritime superiority domain. The system is growing to include all possible applications as is our confidence in its further export potential”.