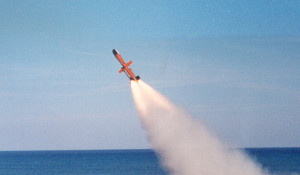 In response to the growing interest for a lightweight and quick reaction naval surface-to-surface missile system for littoral operations, MBDA is introducing Marte Mk2/N, the ship-launched variant of the Marte Mk2 family of anti-ship weapon systems.

Marte Mk2/N, with its operational range in excess of 30 km will provide navies with a complementary capability to the longer range anti-ship missiles such as Exocet and Otomat. It is optimised for operations within the Exclusive Economic Zone (EEZ) and to deal with low intensity naval warfare against a wide variety of low and high value targets.

The Marte Mk2/N missile is identical to the helicopter-launched variant, Marte Mk2/S, currently in its final phase of qualification on the EH101 and NH90 helicopters and is planned to enter service with the Italian Navy in the period 2007-2008.

Referring to the addition of Marte Mk2/N to its range of anti-ship missiles, MBDA’s Director of Sales and Business Development, Jean-Pierre Talamoni said: “The naval marketplace is requesting a missile system which complements long range anti-ship systems to provide a cost- effective solution for smaller targets such as FIACs (Fast Inshore Attack Craft). With Marte Mk2/N, MBDA is responding to market needs with a solution that is expected to have a bright future around the world”.

Marte Mk2/N has benefited from state of the art digitized technology, which provides flexibility in complex environments including coastlines, fixed offshore structures as well as commercial shipping. The missile is particularly effective against fast manoeuvring targets and can be operated without extensive training due to its easy-to-use mission planning system.

From an installation point of view, the Marte Mk2/N weapon system does not require specific sensors other than standard surface search/navigation radars. The compact size and lightweight characteristics of the system, together with its flexible configuration, make it adaptable to a wide range of platforms from 30m upwards. Basic configurations proposed include two single, two twin or two quad ramp launchers depending upon the size and available deck space of the vessel.  In addition, the missile complies with the most recent safety regulations applicable to onboard weapons systems due to its insensitive warhead and rocket motor.