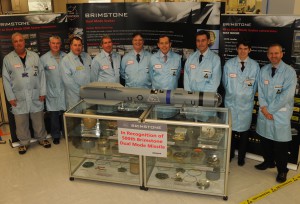 The 500th Dual Mode Brimstone missile has been delivered by MBDA at its UK-based factory at Lostock, England. This unique air to surface missile has won many plaudits from the Royal Air Force for its ability to attack and destroy targets with precision in difficult urban environments with low collateral damage that no other air force was able to achieve during the Libyan conflict.

The British Minister for Defence Equipment, Support & Technology, Peter Luff was present at the production line with the UK Managing Director of MBDA Steve Wadey to thank the MBDA employees for their dedication during the Libyan campaign and for the example they set as the UK’s core complex weapons production facility.

Commenting on the performance of the MBDA team and this milestone, Minister Peter Luff said:

“I am glad that I have had the opportunity to come here and thank you all in person for your efforts in supporting the NATO operation during the conflict in Libya last year. Brimstone and Storm Shadow have a deserved reputation for accuracy and reliability and the use of these missiles alongside the RAF’s other air to surface weapons, was of real importance to the success of the operation to liberate the country. Throughout this time staff at MBDA provided exemplary support in ensuring that this capability was available for use at all times for which we and the people of Libya are very grateful.”

“Dual Mode Brimstone has been a real success story in showcasing the innovative capabilities that MBDA delivers to the front-line and we are delighted to be marking the 500th delivery of this weapon. We believe that this milestone highlights the continued success of Brimstone and the Minister’s visit is a welcome recognition of the contribution MBDA and its employees make to the Armed Forces and their operations.”

The operational demand for the weapon by the RAF was such that MBDA had to ‘surge’ supply to both Libyan and Afghanistan theatres of operation. MBDA’s Lostock production facilities achieved this by making deliveries four months earlier and with 50% greater throughput than was in pre-existing delivery plans. In addition, routine throughput of missiles returned back to the operational theatres saw deliveries three times more than was planned in the same timeframe.