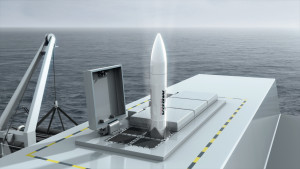 MBDA, Europe’s leading missile manufacturer, and Lockheed Martin [NYSE: LMT], manufacturer of the MK 41 Vertical Launch System (VLS), have entered into a Memorandum of Understanding (MoU).  Under the terms of this MoU both companies agree to jointly explore the market for the integration of MBDA naval missile systems into Lockheed Martin launching systems, plan for all necessary common developments and, more broadly, pursue mutually beneficial opportunities.

Commenting on that event, the CEO of MBDA Antoine Bouvier said:  “Possessing the broadest range of naval missiles available on the market, there is a strong logic for MBDA to join forces with Lockheed Martin whose vertical launch systems have a strong presence in the naval market.  Working in concert, we will be able to offer greater choice to naval customers around the globe providing them with solutions optimized to their exact needs, which has always been MBDA’s priority.”