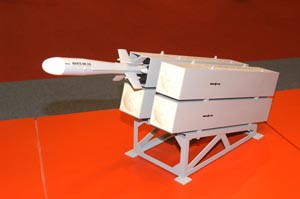 MARTE MK2/N, a new, ship-launched anti-ship weapon system has been added to MBDA’s extensive range of naval guided weapon systems and is being launched at the EURONAVAL 2006 exhibition in France.

The ship launched MARTE MK2/N deploys the same sea-skimming missile as the helicopter-launched MARTE MK2/S system that has already been integrated and qualified on the new EH101 and NH90 helicopters. The system is ideally suited to naval platforms in the 30m to 50m+ class, namely fast attack craft up to and including off-shore patrol vessels.  It also fits well into the spectrum of a vessel’s anti-ship littoral and blue water operations, guns for short range, MARTE MK2/N for medium range and other MBDA weapons like Exocet and Otomat/Teseo for longer range.

With its active radar homing head, 30km+ range, extensive mission planning and optimised warhead/fuze combination, MARTE MK2/N is designed to sink or severely disable ships up to corvette size and to inflict serious damage to larger vessels. Rapid ripple fire can be deployed to saturate the defences of larger targets or to simultaneously engage a series of horizon dispersed targets. Flight waypoints can be employed to achieve Same-Time-On-Target engagements or to enable the host vessel to launch from behind the cover of islands or other littoral obstructions.

MARTE MK2/N has been conceived to offer customers maximum flexibility. Depending on ship size and available deck space, single, twin and quad launchers (the MARTE MK2/N launch canister design is based on MBDA’s Aspide naval air defence system launcher) can be specified either as a new or retro-fit. Subsequent upgrades, to for example a stacked twin launcher from a single twin launcher, are easily achieved without compromising the weapon’s existing footprint. The C2 (Command and Control) system can be either stand-alone or integrated into a multi-function console system. A special fire control radar is not required as target indication is derived from the launch vessel’s own surface search radar. Target designation can also be obtained from other ship sensors such as EO (Electro-Optic), ESM (Electronic Surveillance Measures) or even via a link from another surface or airborne platform.

Fabrizio Giulianini, Managing Director of MBDA Italia, said: “MARTE MK2/N is an example of MBDA’s ability to insert new technologies within its existing product range, increasing or adding capabilities to meet developing customer requirements. Navies operating medium naval helicopters, such as the NH90 or EH101, will be able to maintain a common stock of missiles for deployment from either their helicopters or from their ships. The missile can also be adapted for installation on vehicles for use as coastal batteries. This level of flexibility should interest many customers and so we can see a significant market potential for MBDA”.

Over the past year, MBDA has been carrying out system definition studies on the new system. These have included analysing shore-based firings of the missile, C2 ship installed equipment and design work for the launch canister. Due to MBDA’s extensive experience in ship-launched anti-ship missile systems, MARTE MK2/N has moved very quickly from initial concept to final system design and is now available for customers.