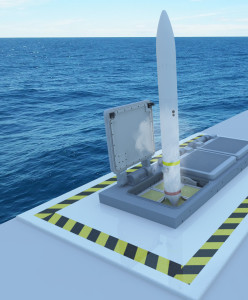 Baltimore, Md., Sep. 15, 2015 – Lockheed Martin (NYSE: LMT) is concluding production of its 3-Cell ExLS Stand Alone Launcher designed to fire MBDA’s Common Anti-air Modular Missile (CAMM) in October and, following qualification testing in mid-2016, will be available for use by Allied Navies around the Globe.

“One of the unique features of ExLS is the ability to reuse already qualified missile components, including canisters and their missile launch sequencing electronics, then adapt them to integrate into a MK 41 VLS using a Host variant, or in a 3-Cell Standalone variant for platforms without VLS”, said Jennifer Houston-Manchester, Lockheed Martin ExLS Engineering Program Manager.  Tim Mansfield, Head of Sea Ceptor/ CAMM New Business for MBDA explains that “The ExLS components are common for all platforms.  Using this approach extends the capabilities of the platforms, and reduces missile integration risks and costs.”

The announcement follows the successful September 2013 test by Lockheed Martin and MBDA of the first launch of a CAMM from the MK 41 Vertical Launching System (VLS) launcher using the Host variant of the ExLS.

Lockheed Martin and MBDA announced in May 2013 a cooperative effort between the two companies to offer MBDA missile systems for use with the MK 41 and ExLS family of launchers.  The system uses MBDA’s soft vertical launch technology to eject the CAMM from its canister and position the missile for main motor ignition.