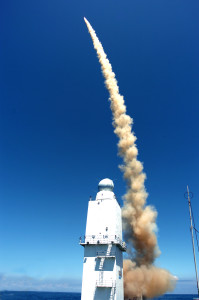 The successful firing marks a further key step in the demonstration of the maturity of the Sea Viper system, known until recently in the UK as PAAMS (S), in the lead up to the missile system entering service onboard the Royal Navy’s new Daring class Type 45 destroyers.

The trial comprised the firing of a single Aster 15 missile launched against a Mirach target simulating a low level attack by an anti-ship missile.  All aspects of the system behaved as expected with the Aster missile intercepting the target at very close range.

Nick Neale, PAAMS Project Director in the Aster Systems Programme directorate, said: “Following on from the successful first firing in June last year, this second firing success kicks off our 2009 programme of work in the best possible way.  We look forward with pride to completing the remainder of the system qualification programme and to the entry of the system into service on board the RN’s new Type 45 destroyers”.

Antoine Bouvier, MBDA’s CEO, said: “This second successful firing is another important milestone for PAAMS and MBDA’s Aster missile system family.  It provides a clear demonstration of the performance leap that the PAAMS system will bring when it enters service.”

All the Sea Viper system elements have been set to work on the first of class Type 45, HMS Daring.  Phase One system integration activities on HMS Daring have been completed with Phase Two of the system integration programme set to start in June. The final system qualification firing trial is scheduled to take place in the summer.  Deliveries of Sea Viper equipment to the second and third Type 45 destroyers, HMS Dauntless and HMS Diamond, are complete with remaining deliveries progressing in accordance with the requirements of the ship build programme.