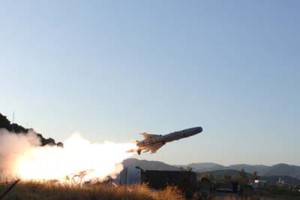 Teseo MK2/A, the latest evolution of MBDA’s Teseo anti-ship missile, met a major programme development milestone with the fully successful launch of an instrumented MT1 missile from a ground launcher at the Salto di Quirra (Sardinia) Inter-Services test firing range. The MT1 missile was a fully configured missile fitted with a seeker but no warhead.

The objective of the test was to verify the ability of the launching system to follow the firing sequence from launch preparation through to verification that the missile had carried out its planned flight. This included the missile’s final attack phase on a real target and its subsequent remote destruction ordered from the launching system.

The results met all requirements, with the Teseo missile perfectly completing the planned mission, including launch, flight over the target at the designated position and altitude, target interception and final remote self-destruct. Total flight time was 300 seconds and the total distance flown was approximately 80km.

Fabrizio Giulianini, Managing Director of MBDA Italia, stated: “This test, along with the one carried out on 20th May this year, is further confirmation of the full integrity of the project phase of the Teseo system. The new updated system will guarantee the Italian Navy a high level of security in anti-ship defence. It also positions MBDA Italia as one of the leaders in the planning, development and production of advanced weapon systems. This launch gives MBDA a new commercial opportunity in the anti-ship sector, not only for the replacement of currently installed systems but also for new customers”.

Teseo Mk2/A is the most recent evolution of OTOMAT, the well known anti-ship missile that has been in service since the early seventies in various navies around the world. The missile has been modernized in response to needs expressed by the Italian Navy, leading to the definition of technological improvements brought to the new missile during its development phase. For export customers, Teseo MK2/A will be marketed as OTOMAT MK2 BLOCK IV.

With an annual turnover exceeding €3,5 billion, a forward order book of over €14 billion and over 70 customers worldwide, MBDA is a world leading, global missile systems company. MBDA currently has 45 missile system and countermeasure programmes in operational service and has proven its ability as prime contractor to head major multi-national projects.