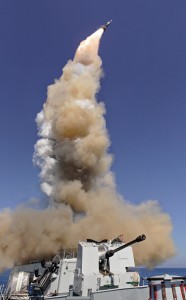 The test fulfilled all the objectives set and, as such, was confirmed to be a complete success.

The firing was conducted on board the Italian Carabiniere ship with the PAAMS (E) System comprising the Empar radar and associated fire control system, A50 Sylver Vertical Launcher and Aster 30 missile.