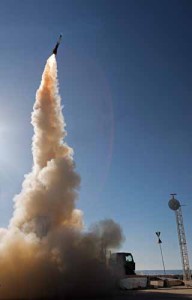 For the firing, all components of the Aster SAMP/T weapon system were tested: the Engagement Module, the ARABEL Radar and Identification Module, a Vertical Launch Unit and the ASTER 30 Missile. The objective of the test firing was to prove the ability of the complete system to intercept an aircraft under a typical operational scenario. For this firing, the Aster 30 missile intercepted a C-22 target drone equipped with radar jammer.

The trial was a total success with the complete range of test objectives achieved:

This firing and other system tests performed at the CELM since the beginning of 2005 have demonstrated the exceptional performance of the Aster SAMP/T air defence weapon and the maturity of the system.

This ASTER 30 firing extends a long list of earlier trials successes with the Aster missile family:

With this final qualification firing success, SAMP/T will now undergo operational evaluation by the armed forces of both France and Italy. During these acceptance trials, due to be carried out over a period of around 16 months, further firings will be undertaken. In parallel, series production will ramp up. The Aster missile is already in series production.