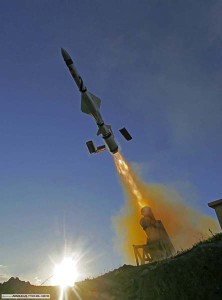 The final qualification firing of the Exocet MM40 Block3 anti-ship missile was performed successfully at the CELM test centre on the island of Levant in southwest France on Wednesday 25th April.

The firing included a trajectory of the littoral attack type from a distance of more than 160 km.

Right from the booster phase, the firing scenario included substantial off-aiming that had to be compensated. After the booster stage was released, a complex trajectory, flying over and round prohibited areas, was followed during the cruise phase.

In the final phase of the flight, terminal flight adjustment was achieved successfully in order to obtain the desired angle of attack on the littoral target. The designated point was hit with all the precision required.

This test confirms that the operating range could be more than doubled for the new Exocet Block 3 missile, which gives this world-renowned missile not only unrivalled naval superiority, but also a littoral attack capacity that reinforces the operational capabilities of the navies that will use it.

Patrick Tramier, MBDA’s Programmes Director, said: “This success confirms the value of the MBDA teams involved in the programme. With this last and successful qualification firing, MBDA has demonstrated its technological value and its capability to manage a major missile programme successfully and within a limited period of time.”