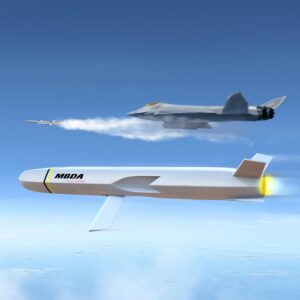 Following the first phases of SCAF work, the signing of this agreement is a change in scale for this programme and lays the foundations for a large-scale European industrial partnership.

Phase 1B is primarily a phase of technological maturation. In co-operation with its partners, Airbus Defense and Space GmbH and the Spanish consortium SATNUS, MBDA will design ‘Remote Carrier’ demonstrators and conduct experiments in connected collaborative combat, both simulated and in-flight. In particular, MBDA will be responsible for the demonstrator of Remote Carriers that can be fired from combat aircraft.

The Future Air Combat System air combat system of the future is much more than an aircraft: it is a system of systems capable of the collaborative air combat. FCAS and its associated technological innovations will bring a revolution in concepts of operations.

As the leader in effects management, MBDA will principally develop new effectors, the Remote Carriers. They are multipliers of the tactical options available to our armed forces. Remote Carriers will force adversaries to reveal themselves, will disrupt them, confuse them and/or saturate them to finally neutralize the threats they pose, which continue to become ever more effective. Capable of operating in packs or individually, the Remote Carriers will cover all areas of combat, from air combat, to maritime operations, and ground strikes.

With a long experience of European industrial co-operation, MBDA’s teams are proud to be contributing to the future of combat aviation.