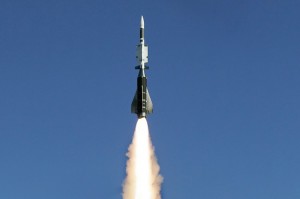 On Nov 22, at the Salto di Quirra joint armed forces test range, the Italian Navy has successfully conducted from Nave Bergamini the first live firing of an Aster 30 missile with a telemetry head, as part of the qualification programme for the surface-to-air extended self defence system (SAAM ESD, Surface to Air Anti Missile System Extended Self Defence).

With the SAAM ESD system, the firing ship is able to both protect itself (self-defence) and other consort ships.
The firing was completed in full accordance with the established plan. All the launch phases were accomplished according to expectations. The successful firing confirms the excellent team work established and developed in perfect synergy between the Italian Navy and the industry.
This test is one of the most relevant technical/experimental trials that the Italian Navy has carried out within the Salto di Quirra test range, and a very important activity that will support the high-tech national industry, also in the export markets. This event represents also the re-entry into service, after 4 years, of the Sardinian test range, fully compliant with the most updated environmental safety requirements.

The missile system, produced by MBDA, is composed of an AGIS Command and Control System, an active Multi Function Radar for searching, tracking, detection and missile guidance, together with 2 Sylver A-50 vertical launch firing modules.

The SAAM ESD qualification plan is expected to be completed with a follow-on live firing planned for April 2017, when the anti-air warfare complex will be managed seamlessly  integrated with the FREMM’s CMS (Combat Management System).