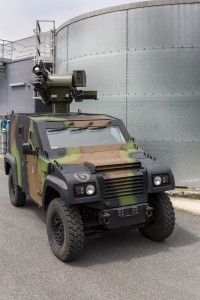 MBDA has started production of the MMP medium-range Anti-Tank Guided Weapon, with deliveries to the French Armed Forces due to take place next year. The Fifth Generation missile is designed to defeat current and future threats and will replace the Milan and Javelin anti-tank missiles of the French military. MMP is a flexible system allowing engagement of a broad target set, rapid into action times and Lock on Before Launch, Fire and Forget mode alongside Lock after Launch, Man in the Loop engagements for collaterally sensitive scenarios.

MMP offers unparalleled precision over its 4,000+ metre range allowing the operator to defeat the target beyond counter fire ranges. A dual mode seeker; uncooled infrared and visible colour channels allows a broad range of targets to be engaged including those with low thermal contrast, a fibre-optic data link making it possible to maintain “man-in-the-loop” control to allow third party designated targets to be engaged outside the launch platforms line of site. The missile’s multi-purpose lethal package (anti-tank, anti-personnel and anti-structure) can defeat targets ranging from heavy tanks with reactive armour to infantry entrenched within structure.

With 20 test firings and numerous ground tests MMP has validated all performance requirements, such as deployment in extreme environment and temperature conditions, shooting under infra-red and colour TV guidance at extreme long-range targets (4,100 meters), firing in confined spaces, and warhead versatility to ensure effectiveness against varied targets.

MMP has been designed from the outset for both dismounted troops and vehicle integration. MMP is being integrated onto multiple vehicles and turrets demonstrating the exceptional flexibility of this system for modern Armies.  MMP provides an ideal solution for Australian defence programmes such as LAND 400 and LAND 4108.