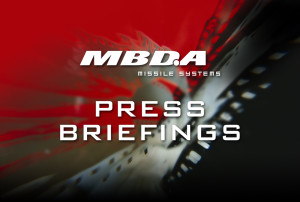 During Farnborough 2016, MBDA will hold 3 press briefings on MBDA’s stand (OE10), located at the top end of the rows of chalets.

Monday 11th July at 10:00 am:  Meteor BVRAAM –  Held at the Saab Experience
Join the Commander-in-Chief of the Swedish Air Force and the Chief Executive Officers of MBDA and Saab for a special event to mark the official entry into service with the Swedish Air Force of the Meteor Beyond Visual Range Air-to-Air Missile (BVRAAM).

Tuesday 12th July at 09:00 am: SPEAR
MBDA’s next generation precision strike weapon system is being designed for the F-35 strike jet. This briefing will provide an overview of the significant achievements from the recently completed Assessment Phase for the missile. Come along to learn more about this weapon and the milestones on route to the recent £411 million development contract from the UK Ministry of Defence.

Wednesday 13th July at 09:00 am – Brimstone:
MBDA will be briefing on how the Brimstone missile is the one… for fast jets, RPAS and helicopters: a multiplatform weapon. The presentation will include a briefing on trials activities undertaken with the AH-64E (Apache) as part of MBDA’s proposal to be the surface attack missile for the British Army’s Future Attack Helicopter.

We are looking forward to seeing you there.