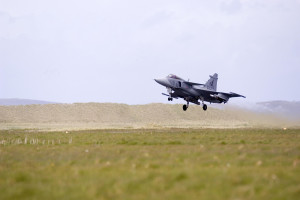 The High Altitude Control and Dispersion (C&D) firing was conducted from a Saab Gripen fighter aircraft, and is the first Meteor firing to have been undertaken in the UK. This firing is yet another significant milestone in the successful European multinational Meteor project and follows on from the lower altitude Air Launched Demonstrator firings conducted in 2006 and a series of seeker data gathering trials completed in early 2007.

Following the successful firing, MBDA’s Meteor Multinational Project Director, Dave Armstrong, said: “This is yet another major achievement for the Meteor programme, once again pushing the performance envelope and demonstrating the continued significant progress in the development of this world beating air dominance missile”.

Carried out by MBDA in line with the requirements of the Meteor development programme, the purpose of the C&D firing was to test the  performance of the missile’s integrated boost, ramjet sustain motor and control systems during high altitude supersonic launch, extended free flight and extensive manoeuvres.

Meteor was rail-launched from the Gripen aircraft flying supersonic at an altitude of 42,650ft (13Km). After a couple of seconds in the boost phase, Meteor’s Variable Flow Ducted Rocket opened its air intakes and the missile successfully transitioned to its ramjet operation. It then accelerated to speeds in excess of Mach 3, successfully executing various challenging manoeuvres including using the novel bank while turn control algorithms specifically developed for this high performance missile. The missile followed a pre-programmed flight profile for several minutes, which also demonstrated the high end game control capability for missile launches even at the maximum kinematic range. On achieving the trials objectives, Meteor was broken up in flight within the confines of the test range as intended.