Home » News » Brimstone –When missing is not an option 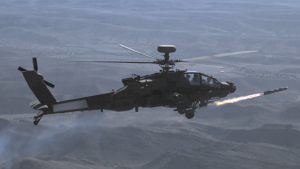 MBDA and Boeing have successfully completed a series of physical trials and firings of Brimstone on the AH-64E attack helicopter. These firings demonstrated the capability of the weapon to guide using Brimstone’s Semi-Active Laser (SAL), Dual Mode SAL/millimetric wave (mmW) and fully autonomous mmW guidance modes.

Brimstone releases were from hovering, moving and manoeuvring/banking scenarios against Main Battle Tanks and Pickup Truck targets. Dan Girardin, Boeing Flight Test Engineer, Mesa AZ: said “The mmW autonomous shot from a moving and banking platform against an off-axis target with the missile hitting the MBT turret ring was the most aggressive shot I have seen in my 30 years of the Apache programme”